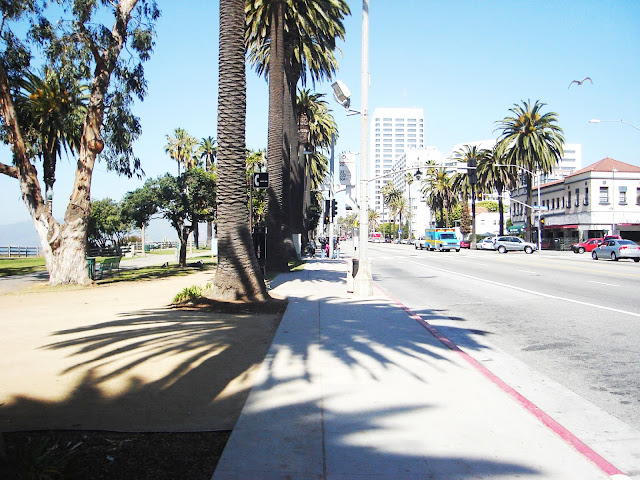 Todays post is part 2 of my throwback USA trip. Last week I posted part 1 which was about Las Vegas. If you haven't read that then I'll explain, 9 years ago my family and I took a trip to America to Las Vegas and Los Angeles. Since this week was 9 years ago since we went I'm doing two posts on the trip and this is my second one.

Once we got to LA we got to our hotel, we were staying in the Sheraton Delfina in Santa Monica (which is now called Le Meridien Delfina). The hotel was close to Santa Monica pier, 3rd Street Promenade and Santa Monica beach, so it was walking distance of a lot.

We stayed in LA for a week, I can't entirely remember what day we did each thing, but while we were there we did a lot. We visited 3rd Street Promenade, Santa Monica pier and went on rides and the horse carousel, Santa Monica beach, Hollywood, Beverly Hills, Malibu and Universal Studios etc...

We went to Malibu and drove on the mountains. We were literally above the clouds and it was so cool.

We spent the day at Universal Studios in Hollywood, which was incredible. We went on the tour around it which was super fun. There were a lot of sets that I didn't know, but there were sets that I knew of, like Jaws, Desperate Housewives (at the time I didn't watch Desperate Housewives, my Mum had seen some episodes, but I've been obsessed with it for the past 5 years or so and love looking at these photos), King Kong and a few others.

After our time in America, we then flew home from LAX back to London. I'm so grateful and thankful for my parents for taking us on an amazing holiday.

Have you ever visited LA? Where would you like to go on holiday?